Blog -> Snow and Nonprofits: Both Bring Out the Best in People

Snow and Nonprofits: Both Bring Out the Best in People

Early in 2014, the Southeast got some snow. Specifically, Atlanta got some snow, and Atlanta doesn’t really do snow. (If you don’t believe me, Google “SNL Weekend Update Buford Calloway.”)

In the first snow storm at the end of January, I, along with many people in Atlanta, got a nasty surprise when it snowed more and quicker than we’d planned for and was stuck 25 miles from my house and in a traffic jam (an online story by Rebecca Burns sums it up well).

Every crazy story you’ve heard about what it was like for people to get home from work and get their kids from school is true. It was the biggest mess I’ve ever seen. I counted myself very, very lucky that though I didn’t make it home for about 24 hours, I had a warm, safe office building to sleep in with people I knew, food to eat and bathroom facilities. The couch I slept on wasn’t too comfortable, but it beat the heck out of sleeping in a cold car.

My trip home the next morning, Atlanta snowjam #1

I had my eye on social media during the whole fiasco, as many people did. I was amazed by the outpouring of strangers helping strangers that sprung out of the storm that overwhelmed the city. Drug stores, grocery stores and home improvements stayed open and let weary commuters come inside and stay. People updated social media where they were stuck, those statuses were shared and many of those people were offered a place to stay at a friend of a friend of a friend’s, or at a total stranger’s.

To me, it was like what nonprofit organizations do every day (read the Community Foundation of Greater Atlanta’s take on this). I loved seeing stranger helping stranger in a time of need. But it reminded me that the organizations we help at Nonprofit Media Solutions do this every day. It’s part of their mission. No wonder we at NMS get so excited about what we do!

I’m happy to say that while my hometown, Raleigh, NC, had some of Atlanta’s troubles on the second snow storm that came through two weeks after the first, I had a week of work-from-home days and we never lost power. It was a pleasant few days where I was home bound but with grants to write and hot chocolate to drink in front of the fireplace. I much prefer this kind of snow day if I have to have one! 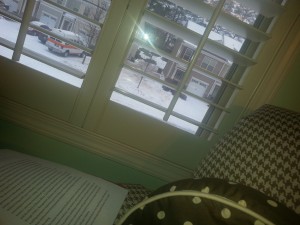 Site by Diana Nichols and company