We’re certainly not the first people talking about Dan Pallotta’s TED video, “The Way We Think About Charity is Dead Wrong,” a viral video from several years ago. Nearly over 900,000 people watched it in its first week or two. 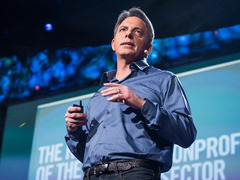 Pallotta spends almost 19 minutes opening our eyes to the double standards present. The nonprofit industry can’t play by the same rules as American businesses do, and Pallotta thinks it’s time to change that.

Here are a few of the highlights:

What part of Pallotta’s messages resonates most with you? Tell us.