Wednesday was a mostly work-from-home day for me, and I spent it in two ways: organizing some grant research into an action plan for one of our clients, and hopping in and out of social media to see how people were remembering and reflecting upon what happened 12 years before. For me, 12 years ago on September 11 I had just gotten to work at my first full-time job after graduating college the spring before. I was dealing with the fax machine and the voice mails that had come in overnight, and hadn’t yet turned on the radio or my computer. My boss came in the door just after hearing about the first plane on the radio in his car. We turned the radio on for news just as the second plane hit. We spent the rest of the day just like everyone else: in a fog but desperate for more news that would help us make sense of what had happened. 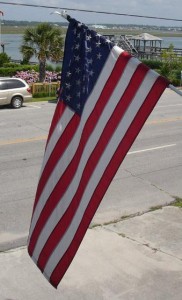 On Facebook, friends posted where they were and what they were doing when they learned of the news. Having social media accessible to us now is a great medium for sharing these kinds of things that we can all relate to. One of the most poignant ones I saw was from a friend who was at her first teaching job in the fall of 2001 (she is now an amazingly talented high school administrator). She wrote that she knew, even as an inexperienced teacher, that however she reacted to the terrible news would be how her students reacted. How she handled herself and managed her classroom that day are experiences she draws upon each day as an educator even now.

In the midst of the remembrance of the day, I was especially grateful for the work that occupied my time on Wednesday. We’re right in the middle of our September We Heart Nonprofits social media campaign, something that’s a lot of fun and very impactful for us at Nonprofit Media Solutions. There’s nothing better than having nonprofits to feature and work with. We’re constantly amazed and humbled by what these organizations are doing to make the world a better place. It’s great to see so many positive forces at work in our post-9/11 world that still feels in some ways just as uncertain as it did 12 years ago. Isn’t it good to know that despite the negative, unhappy things around us that people are still doing what they can to make the world a better place?